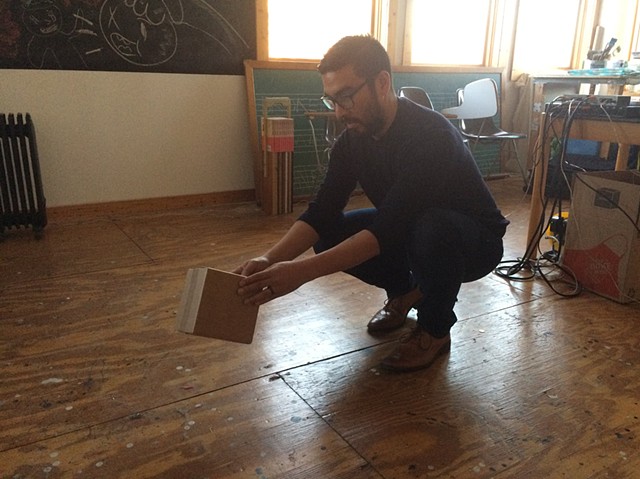 YOUARENEVERALWAYSHERE is an exploratory work that ruminates on the nonlinear. Enclosed within an enclosure and pushing out from within, the box of Box Gallery becomes a placeholder for an unpredictable set of new material that emerges from inside. As a site that is an object but also utilitarian in nature, the box withholds the capacity for a recognition of space, one that upends the linearity of progression as other dimensions complicate the singular. Using Box Gallery as a point of departure, as one that allows for the space of Compound Yellow to become activated through performance, this multichannel sound performance opens up a recognition of place through a series of fixed and unfixed events that may happen in the space.

Alejandro T. Acierto is an artist and musician whose work is largely informed by the breath, the voice, and the processes that enable them. He is an Artist in Residence in Critical Race Studies at Michigan State University, a 3Arts awardee, and has shown his work internationally at the Film Society of the Lincoln Center, MCA Chicago, and the Art Institute of Chicago among others. A founding member of Ensemble Dal Niente, Acierto holds an MFA from University of Illinois at Chicago, an MM from Manhattan School of Music, and a BM from DePaul University.